During his time in Korea, Dr. Adams and his practice partners began a program for screening military family members for Adverse Childhood Events or ACEs. The idea for this new program stems from research led by V.J. Felitti, who studied the relationship of childhood abuse and household dysfunction with many of the leading causes of illness in more than 17,000 adults. The study showed what many already intuitively suspected: the more ACEs a child experienced the more likely they were to develop mental health issues such as anxiety, depression, and even suicide. However, the astounding part of the study was a definitive correlation between ACEs and physical disease including cancer, heart disease, and COPD. In fact, someone with six or more ACEs had an average 20-year decrease in life expectancy. ACEs were also found to be much more prevalent in the population than suspected, with 66 percent of the population having at least one and 13 percent of the population have four or more. Follow-up studies have consistently reproduced Felitti’s findings.

Dr. Adams describes the relationship between ACEs and increased morbidity and mortality in adulthood being linked to a phenomenon called “toxic stress.” Not all stress is pathologic. When studying for a test or running from a bear, stress is useful. But, when that “bear” is an abusive parent, the uncertainty of food, or substance abuse in the home, it sets up a state of constant stress, which is what Dr. Adams and his colleagues mean when they describe “toxic stress.” Children with toxic stress have a disrupted hormone axis, abnormal neural development, and even demonstrate alterations to their very genome. These disruptions are the causal link between a patient’s ACE score and poor health outcomes as an adult. Fortunately, early intervention with behavioral health, social services, and parental education has been shown to mitigate long-term effects and improve outcomes for children with high ACEs.

Given the prevalence and consequences of patients with increased ACEs, Dr. Adams and his colleagues were surprised to learn that only three percent of pediatric practices in the U.S. screen their patients for ACEs. Upon implementation of a screening program, Dr. Adams’ practice was able to identify numerous at-risk children and connect their families with needed social and behavioral health support. Now that Dr. Adams is at Walter Reed, the military’s flagship hospital, he is hoping to expand the screening program to his new clinic and eventually to all pediatric practices throughout the Department of Defense.

Dr. Adams is no stranger to the detrimental effects of stress in childhood. Though he never experienced any abuse or neglect in childhood, when he was 5, his neighbor’s house was hit by lightning and caught on fire. Afterward, he developed astraphobia, an extreme fear of thunderstorms. He credits the nurturing environment at Westminster and his third grade teacher, Julia Joiner, with helping him to overcome his fear. When storms occurred during school, Mrs. Joiner paid special attention to him, comforted him, and provided a safe environment where he could work through his fear. She taught him how to be courageous even when he didn’t want to be. He especially remembers the extra time she spent with him, helping him to catch up on schoolwork missed during a storm and preventing his classmates from teasing him. It is exactly this type of nurturing environment that has been shown to protect against the effects of toxic stress.

Dr. Adams credits much of his success as a physician, and particularly his ability and confidence to pursue this new program to his time at Westminster. “Westminster was crucial in my preparation for college and my academic experience, and conditioned me to do the hard work,” he said. He chose to major in chemistry as an undergraduate because of Susan Smith and the way she “opened my eyes to science” and sparked my love for chemistry. She also prepared him for when science, and his faith seem contradictory. In those moments he would often recall her words: “God is the author of science and the Bible. We know God doesn’t contradict himself. The problem is we are fallible humans trying to make sense of the word and works of an infinite God.” Dr. Adams also credits Ruth Ann Fliermans, who after having taught his two older brothers before him, helped him to exceed his own expectations and learn that he was capable of much more than just being the family and class clown. “Many of my achievements and current work would not be possible if it weren’t for the life-changing work of the teachers and my time at Westminster,” Dr. Adams said. 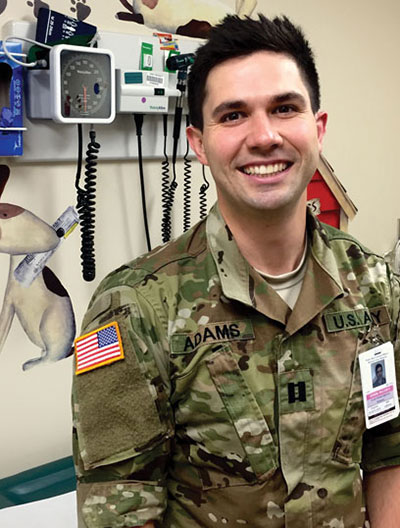