Westminster is larger than it seems. At first glance, it’s comprised of a mere 600 students, which is smaller than a single graduating class at some schools. But Westminster’s influence expands much further, as demonstrated in the life of our 2016 Distinguished Alumni Award winner Amy (Hancock) Robertson ’92.

The education and Christian framework that shaped her at Westminster reaches beyond Augusta to places like Mexico and Chile, where Amy and her family serve on the mission field. Amy was enrolled from ages four through 18 at Westminster, where she was challenged academically in the classroom, physically on the basketball court, and socially, emotionally
and spiritually as she developed her own worldview. She said that she is still being influenced today by the Westminster teachers who invested in her relationally and by classmates who still inspire and encourage her.

Moments that have stuck with her include memorizing scripture in Miss Betty Gene’s kindergarten class and being challenged to “live in Christ’s strength” by Ms. Volpitto in sixth grade. She went on to be named female Athlete of the Year and valedictorian of her graduating class, but it was more than those accomplishments that prepared her for college. It was the spiritual strengthening she gained at Westminster that gave her the confidence to share Christ and stand strong in her beliefs at Vanderbilt University.

Furthermore, it was there at the Reformed University Fellowship where she first met Steve Robertson. Amy graduated Phi Beta Kappa from Vanderbilt in 1996 with a Bachelor of Arts in English literature, and a short time later, she and Steve were married. After a few years of living and working in Nashville, Tennessee, the Robertsons were called to vocational ministry, and in 2000, moved to Guadalajara, Mexico, to plant a church for Mission to the World.

Amy described it as an “all-family endeavor” as the Robertsons established Cristo Rey Eterno, where Steve served as pastor. The Robertsons opened their home and lives – which soon included their three children, Joseph, Mary Beth and Johnny – regularly hosting neighbors, visitors and those in need. They also facilitated women’s groups and children’s educational programs and trained men and women in Mexico to lead them. The Robertsons were also involved in supporting a foster care home, writing and adapting Bible studies in Spanish and looking for new opportunities to share the Gospel.

As the Distinguished Alumna addressed the class of 2016 during Commencement, she defined the word “distinguished” as “God in us, a full-time calling.” She also encouraged the graduates to pursue that calling and lean on God as their secure and unchanging rock, even when the path is not always clear.

Amy discovered how she fit into God’s story of redemption at Westminster. She responded to His calling on her life and continues to follow Him, taking the Westminster education that shaped her beyond the classroom to now serve in Chile and wherever else the Spirit leads her and her family. 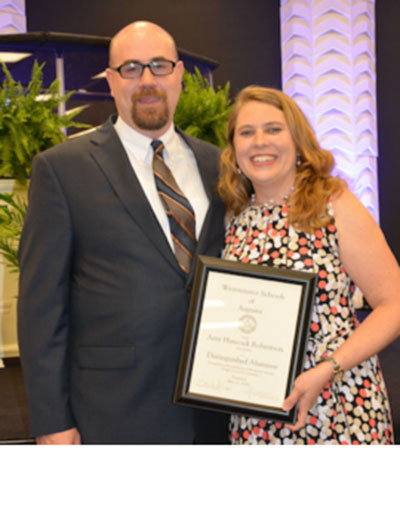