When Zach Pollard ’01 took the stage at the 2014 Commencement ceremony to receive the 2014 Distinguished Alumni Award, he began by admitting that he didn’t feel very distinguished.

In fact, Zach gave a beautiful explanation of how his perception of God had changed throughout his life, describing his transition from viewing God as a large cosmic presence to knowing Him as a personal and loving Father. That truth - Zach pointed out – is what makes each individual truly distinguished.

Westminster is excited to recognize him for the remarkable ways he has impacted multiple communities since leaving our school.

A native of Appling, Zach stayed very involved during his years as a Wildcat, participating in soccer, track and golf, while maintaining membership in Latin Club, Beta Club and National Honor Society. Additionally, he helped inaugurate Westminster’s pep band and sang in the chorus for three years. He credits teachers such as Mr. Nichols, Mr. Rich, Mr. Hood and Mr. Flint with investing in him intellectually and spiritually and with making his time at Westminster a valuable experience.

Zach headed to Athens in the fall of 2001 to pursue a Bachelor of Science in agricultural engineering from the University of Georgia. Upon his graduation in 2005, he received the Highest Academic Achievement Award in Agricultural Engineering for his class.

“Westminster gave me a challenging, educational environment that helped me grow and develop into the person I am today,” he said. “The teachers really cared about the students’ spiritual and educational growth. Their investment helped me continue to succeed scholastically at the University of Georgia.”

Next, Zach felt the Lord leading him to Branson, Missouri, to work with Doulos Ministries, which provides individuals in their 20s the opportunity to work with troubled teens in a residential care facility while also being personally discipled. Zach participated in the yearlong program and then remained with Doulos Ministries for three more years as an associate staff and house director, mentoring those going through the program as well as continuing to help the teens at the facility.

After concluding his time with Doulos Ministries, Zach moved to Houston, Texas, in 2010 to continue in a similar line of work, an urban ministry program called Mission Year. As a participant, Zach spent a year in a low-income neighborhood, where he worked to build relationships, fought for justice and helped local non-profit organizations.

Psalm 74:3, 20-21 were especially important verses to Zach as he approached his work at Mission Year: “Turn Your footsteps toward the perpetual ruins; The enemy has damaged everything within the sanctuary…Consider the covenant; For the dark places of the land are full of the habitations of violence. Let not the oppressed return dishonored; Let the afflicted and needy praise Your name.”

Zach’s prayer during this time was “that God will use me as His ambassador to these ‘perpetual ruins’ and ‘dark places’ that need His redemptive and powerful love.”

Zach remained with Mission Year as an alumni intern for a second year, serving in another low-income neighborhood as team leader. He also worked at a local mission center that provided after-school programs for elementary through high school students, services for the homeless community and food programs.

While serving in Houston, Zach met his future wife, Kate, a fellow Mission Year participant, and they married on Oct. 6, 2012. They have one son, Quentin, who was born in February 2014.

Zach left Mission Year for one year, serving as a teacher’s assistant in a Houston public school, before returning with his wife as co-city directors. Currently, they oversee three teams, manage administrative tasks and create partnerships with local churches and non-profit organizations.

Zach continues to pursue music and is a member of a band that has produced multiple albums. He is working on a master’s degree in music therapy from Sam Houston State University, hoping to use his talents in his ministry.

As Zach’s speech emphasized — and as his decisions so clearly reveal — the mark of someone who is truly distinguished is how they receive the love of their heavenly Father and, in turn, pour it out on those who need to experience it. The Westminster community is proud to recognize Zach, an excellent role model for the Wildcats who will follow in his footsteps. 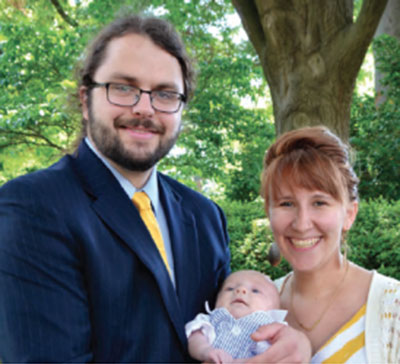