We have a state champion! 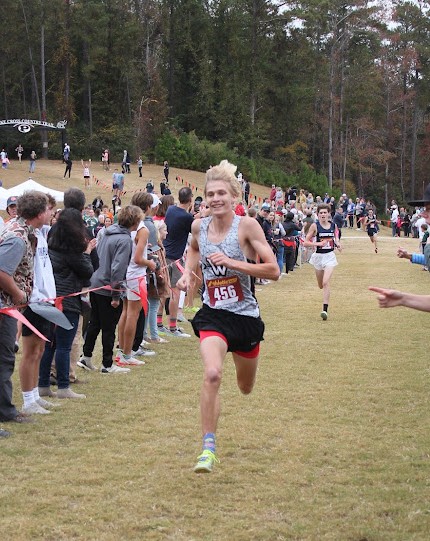 The varsity cross country teams traveled to Macon on Saturday (October 29) for the GIAA State Cross Country Meet. After a big win at the region meet in Brunswick that included the fastest ever average finish time, the boys team entered the state meet as the number one seed and looking to claim a third consecutive state title. The girls finished second in the region meet and were looking to build on that momentum in the final meet of the season. Unfortunately, the flu had other plans. The upper school was hit hard by the flu last week, and the cross country teams were not immune. All six of the girls and all but one of the boys fell ill at some point during the week.

As a result, the girls were not able to field a full team for the state meet and did not receive a team score. Those who were able to compete ran well, posting times comparable to those in the region meet despite running on a more difficult course.

With more depth than the girls, the boys were able to field a full team but had to make a last minute substitution and left behind 2-3 boys who had intended to travel with the team. Still, they put seven boys on the course, and those boys competed to the best of their ability. As the top seed in the race, Adam Lippe ran well enough to win and claim the title of State Champion. Christian Vitacco and Lucas Johnson finished 6th and 8th, respectively, and were named to the all-state team. But in the end, the flu that had plagued the school throughout the week was too much to overcome and the boys team finished 3rd, just 3 points from the state runner-up (Stratford Academy) and 17 points behind Deerfield-Windsor, who claimed the 2022 state title. Congratulations on a great season, Wildcats! We are proud of each of you.