Westminster Announces the Creation of the David Hanks Legacy Scholarship

Westminster Schools of Augusta is pleased to announce the creation of the David Hanks Legacy Scholarship, in honor of Emeritus Board Member and long-time Westminster supporter, Mr. David Hanks. 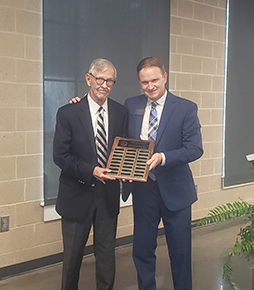 To be eligible for the scholarship students must have modeled for the last two years, and continue to embody, the character traits of Mr. Hanks. Some of these would be: an evident and transparent love of Westminster; a missional, servant's heart to those in, and outside of, the school; and a demonstrationof being a proud ambassador and champion of the school. Students must be a rising junior or senior at Westminster and enrolled for the upcoming year, be in good academic standing, and be a student of authentic character and a positive attitude.

Students will be nominated and voted on by faculty in late spring, and the student selected will be awarded a $5,000 scholarship for their Westminster tuition for the upcoming year.

The David Hanks Legacy Scholarship was announced at a luncheon following the 50th Anniversary Opening Convocation. The following are comments by Westminster Head of School, Dr. Shawn Brower, as he announced the scholarship:

For 50 years God has sustained Westminster and provided incredible people who have sacrificially given of themselves in immeasurable ways so the school might flourish into what it now is today! However, we would like to recognize one special individual for his nearly 43 years of immense and abiding love, deep sacrifice, bold action, courageous leadership, prayerful, deliberate, and thoughtful Christ-honoring action during the 80s, 90s, and 2000s. This person of honor would be the humble servant of Westminster and ambassador of Jesus Christ - Mr. David Hanks.

Mr. David Hanks has served Westminster as a board chairman, a fundraiser, a parent, a sincere and faithful prayer warrior, a mentor to school leaders, a supporter of faculty and students, and a positive and uplifting presence at school activities and events. He loves the school as if it were one of his children! This springs from his immense gratitude for his daughters' education, which has led to an unquenchable desire for countless others to also receive an excellent education from a Christ-centered and Biblically saturated perspective. This is what fuels his ever-burning fire and passion for seeing Westminster thrive! One alumni member from the class of 1980 recently said, “David Hanks is ‘Mr. Westminster!’"

Due to his faithful service, God has enabled numerous young men and women to receive a Christ-centered transformational educational experience that has positively changed the trajectory of their lives. There is no doubt that Westminster’s foundation is solid and runs deep, is far-reaching, and has a future that remains bright because of a man after the heart of God who faithfully made it his life mission for students “to glorify God by providing an excellent education that equips students to live extraordinary lives for Jesus Christ.”