The Westminster Schools of Augusta cast of "A Gentleman's Guide to Love and Murder" wins first place at the GISA AAA One Act competition! 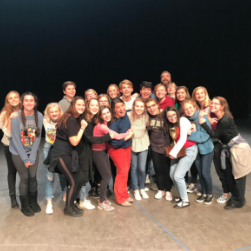 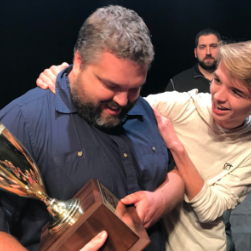 Westminster Schools of Augusta has won three state titles for one-act play competitions, but this year's was special.

Fine arts director Paul Owen said that's because this is the first year in over a decade that the school has won the Georgia Independent School Association's AAA State One-act Competition by performing a musical. The musical, "A Gentleman's Guide to Love and Murder," featured his son, Judah, in the starring role, along with his four other children in various positions on and off the stage.

Along with winning the competition, 10th-grader Judah and ninth-grader Jack Tabb, who played eight different characters, each received an award for best performer at both the region and state contests.

The competition took place Nov. 15 at Southeastern Technical College in Vidalia. Twenty-five students, from eighth-graders to high school seniors, competed against seven other schools from across the state.

"This was by far the toughest overall competition that I've seen in a long time," Owen said. "There were really good shows, and when it came down to them announcing it we were not sure how it was going to go, so we were super excited and got all three first-place votes, which was a big deal."

Each performance was allocated 55 minutes, from setting up to taking down the set. Owen said Westminster's show lasted 54 minutes and 30 seconds.

Owen attributed the win to hard work and the cast's desire to win the competition for each other.

"This group loves each other very well. We all care about each other," Owen said. "It's very much a family environment. I feel like that propelled us to work hard for each other and to make our show the best it can be."