Congratulations to Mike Freace who was inducted into Westminster's Athletic Hall of Fame at the annual Athletic Awards Banquet in May 2018.

Congratulations to Coach Mike Freace who was inducted into Westminster's Athletic Hall of Fame at the annual Athletic Awards Banquet in May 2018.

He started his soccer career at a young age playing as early as first grade. After high school he went on to play four years of soccer at Houghton College, where he played in three national tournaments, won three region and two conference championships. Along with coaching at Westminster, he has coached at Roberts Wesleyan College, where he attended two national championships, at the Augusta Arsenal Soccer Club, and with the Olympic Development Program.

Coach Freace, who recently captured 400 career varsity wins, has coached both the boys and the girls soccer programs, but has dedicated his time to the boys program since 2012 and is currently the upper school principal. After 17 years he leaves Westminster and the Augusta area to pursue God?s calling on his life in ministry with the Charlotte Eagles as part of the Missionary Athletes International in Charlotte, North Carolina in fall 2018.

The first line of the Wildcat Way states, "Honor Christ first," and Coach Freace has modeled that for his students and all those who've worked with him throughout his 17 years at Westminster. In his opening remarks, he said, "I think maybe the most difficult part of being up here is that it goes against what I have preached to our program for 17 years . . . we are all part of something bigger, it is not about us. Even as our teams approach this evening, we talk about being gracious for what has been given to us, but always making sure to give honor where it should be given. So my goal is to give honor where it is deserved,"

After thanking his family, all of the students, and the coaches he has worked with over the years, he concluded with the following words of wisdom: " . . . be Christians who just happen to be athletes, not athletes who happen to be Christians. There is a significant difference...put one foot in front of the other, every single day, to the best of your ability. Wake up each morning, and do the little things for Christ with your best effort. Pray. Spend time with God. Love others well. Serve others well. Don't cut corners. Be a great friend. Do your best."

He ended by quoting Psalm 115:1, which says, "Not to us, Lord, not to us but to your name be the glory, because of your love and faithfulness. 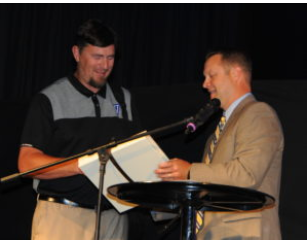