Westminster announces the valedictorian and salutatorian for the Class of 2018. 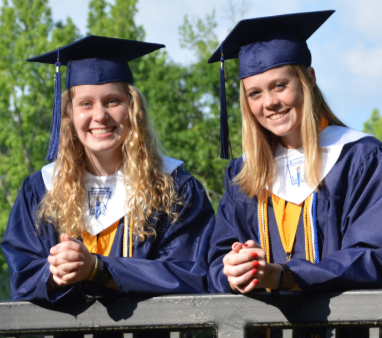 Westminster Schools of Augusta has named Caroline Vickery as valedictorian and Kylie Duckworth as salutatorian for the Class of 2018.

Caroline, the daughter of Christopher and Julie Vickery of Augusta, is a Westminster Graduate with Distinction and a member of the National Honor Society and Beta Club. She is also a National Merit semifinalist. She will attend Furman University in the fall. Her plan is to major in Sustainability Science and eventually work for a company where she can help them operate and source their products in a more sustainable manner.

Kylie, the daughter of Steven and Lisa Duckworth of Martinez, is also a Westminster Graduate with Distinction, a member of the National Honor Society and Beta Club, and a National Merit commended student. In addition she has been a member of the Varsity Tennis team for four years and has won the GISA State Singles Championship title during her sophomore and senior years as well as led the team to a GISA State Team Championship title three years in a row. She also was awarded the prestigious Morris C. Johnson Academic-Athlete Award and is one of an elite few who are recognized each year with this award by the GISA for excelling academically in the classroom, as well as in athletics. In the fall of 2017 she signed a letter of intent to play tennis at the University of Tennessee. She plans to major in Biological Sciences with a concentration in Biochemistry, Cellular and Molecular Biology and hopes to attend medical school.

Both Caroline and Kylie have each been in attendance at Westminster for 14 years, with their first year of enrollment in 2004. "It feels almost surreal," said Kylie, about being named salutatorian. "After 14 years, I never would have expected to end it on such a high note."

Upon learning she would be valedictorian, Caroline said, "Being named valedictorian was something I aspired to achieve, so now that the day has finally come, I am honored and humbled...The Lord blessed me during my time at Westminster with academic success, and I pray that I have honored Him well with that gift because it is all by Him and through Him."

They will each deliver a speech to their classmates during Westminster's 35th Commencement Ceremony on Friday, May 25, at 10 a.m. at Warren Baptist Church.